Supraśl lies 16 km in the north-east from Białystok on the western shore of the river of the same name -  Supraśl. As a one and only town with the seat of administrative commune authorities it directly came into Knyszyn Forest Landscape Park area. Supraśl is a small town with the population of approximately  5000 inabitants. Location among forests with no industry, a special microclimate, the presence of bilberry bushes, the clean waters of the Supraśl river and rich history with numerous relics of architecture all together  make Supraśl an attractive place with the chance to become a large tourist centre.  The tradition of Supraśl being a summer holiday go back to interwar era. Though the textile idustry was develping strongly, one could find here pensions,   an antituberculosis sanitarium, forest park with a pavilion, tennis courts, a bowling alley, a stadium, ski and sledge centre and swimming area.

The beginings of the town are unknown. Probably it functioned as a small setlement  already in the 14th  century on the border of Grand Duchy of Lithuania and Mazovia Region. Sprząśla river (former name of today Supraśl river) at the half of 14th  century was a border of both areas.

In the 15th century  Supraśl belonged to Chodkiewicz dynasty. In 1498 Aleksander Iwanowicz Chodkiewicz hard upon his residence builded a monastery in Gródek for Basilian monks who did not like the place a lot. It was simply to loud  while a rule of solitude required them  to live far away from urban noise and civilization.  The monks asked the founder  for relocation to another place. Chodkiewicz gave them assent for building a monastery at place called Sucha Gruda where the Berezówka and Grabówka rivers flow into the Supraśl river. By 1501 the small, wooden  church  of  St. John Evangelist was builded. A few years later between 1503 – 1511 a brick Church of the Annunciation of the Holy Mary was built. Since the Basilian monks appeared in Supraśl the setlement concerns the history of monastery for over 300 years. The period between 1500 and 1510 was the time of different grands  for Basilians monks monastery from Chodkiewicz Dynasty and other contributors. 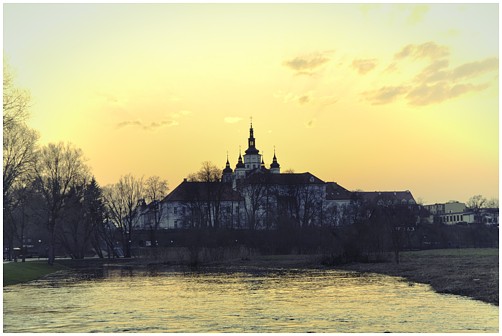 
Proffesor Wiśniewski in his publications writes altough it was not clear if Supraśl gained the urban status given by Chodkiewicz Dynasty it was marked as a city on the map of Makowski around 1600.

In 1614 monks from Supraśl were incorporated in the Union of Brześć transacted by Greek and Catholic churches  in 1595 in Brześć at Bug river.

In 16 and 17 centuries there were vocations for abbots of Basilian monastery against to union  monk  bishops.

Uniate period was the time of full bloom what was testified by wealth of the monastery and its development. In 17 century the Archimandrite Palace was build which was the seat of metropolitans from whole Rus territority, bishops as well as Supraśl abbots.

Starting from the Abbot Palace the Basilian monks continued construction of the monastery up to 1834.  The crowning of the whole monastery complex was the layed with stone, baroque  belfry gate which was finished in 1697. It burned in 1702 but was rebuilded in 1752.

Basilian monks popularised education in Podlasie Region establishing among others printing house. They also gathered magnificient  library containing  about 80 toms of manuscripts including „Supraśl Chronicle” and „The Codex Suprasliensis”.

After the third partition of Poland, Supraśl became incorporated under Prussian Partition. The property of the monastery was confiscated.  In 1798 with the permission of Pius VI Supraśl became the seat of the bishopric of the Catholic Church by the Russian Empire.  In 1807 it was again an othodox church.

In 1807 the Białystok District was annexed by the Russian Empire.

After the failure of the November Uprising high duty taxes on textile goods were introduced on the border of the Polish Kingdom and Russia what led to the closing of many textile factories. That was also the reason of moving textile factories from Zgierz and Łódź to Supraśl which was within the borders of the Russian Empire  having free access to the vast Russian markets.   Influx of industralists developed local textile industry which resulted also in architectural division of Supraśl. At this point two families of Zachert and Bucholtz  played an important role in town history. The small settlement by the monastery became a large industrial center, populated by over 3000 inhabitants living in approximately 400 households. Beginning in the 1860’s the dynamics of the development of the the town began to subside and, in time, other centres such as Białystok, which was on the railroad line between Warsaw and St. Petersburg, began to dominate.