Knyszyn Primeval Forest is located in north-east Poland. According to the phusico-geographical division of the country by J. Kondracki (1978) it belongs to the Podlasko-Bialoruska High Plain and the eastern part of macroregion called Połnocnopodlaska Lowland. From the regional division point of view it covers the areas of two mezoregions:  Białostocka High Plain (90%) and Sokólskie Hills (10%).


As a result of  following glaciations  The Knyszyn Forest is characterised by rich surface features. Many hills of frontal moraines are build with boulder claies and sands, eskers or kames consist of coarse sands and gravel (zwir), Sandrs with local dunes.

A few surface features zones can be pointed in the Knyszyn Forest’s area. Starting from the north of the park – this part is filled with moraininc plateaus, in the western and middle part topographic features (uksztaltowanie terenu) change its character to single heights surrounded by extent depressions; in the southern part the terrain is slightly shsped. The height differences in the park come to 91 m – from 118 m above sea level in  Czarna river valley to 2009 m above  sea level to the north from Królowy Most on the Św. Anna mountain which reaches relative height of 50 m (from the base to the top)


One of the environmental values of the Park are waters, especially springs which rarely occur in lowland lanscape of Poland. Their frequent presence in the Park territory is one of the reasons regarding the particular protection of drainage basin where they occurr as well as surrounding flora communities testifing their occurrsnce.

Primeval forestal spheries are distyinguished by high abundance of underground waters. It is showed up in occurrence of numerous, natural outflows of these waters including: leaks, seepages, bog-springs, and springs. The last ones give a striking number of 430 with the spring yield from 0,5 l/s to 50,5 l/s. Distribution of these unique hydrologic object is irregular with the biggest condensation in the main river valleys.

Natural outflows  formation of underground waters are characterised by a geological strucure as well as terrain morphology. High water-bearing levels are dissected by watercourse and river valleys. For this reason most springs occurring here possess a valley character where the water-bearing level has been cut to impervious sediments. Numerous springs occurr in short sideway valleys eluding to Supraśl Valley. 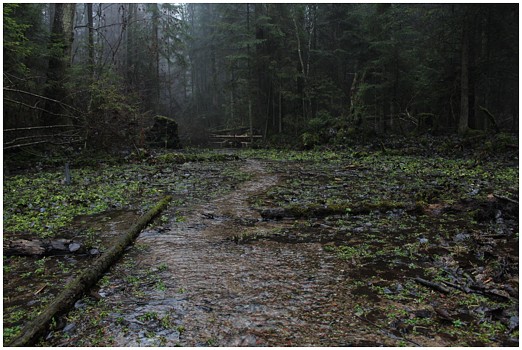 
Majority of rivers preserved a natural, meandring course. The main and the longest river of the is the Suprasl (106,5 km) – the right tributary of the Narew river. The old name “Sprząśala” tells about the character of the river which clips together  all the  watercourses determining the main drainage catchement of the Knyszynska Forest. In the vicinity of the Park the main water section comes through and divides drainage catchements of Wisła and Niemen rivers.