Flora of PKPK as well as the whole “North Unit” to some extent varies from the flora in other regions occuring in lowland Poland. Furthermore it is characterized by the share of several geographic elements of flora which is typicall for this region. The thing that disinguishes Knyszyńska Forest from the other forest complexes is its remarkable boreal character. Boreal and subboreal associations occupy 60 % of forest communities in the Park. Subboreal features are dominated by the presence of pine coniferous forests - Carici digitatae Piceetum, mixed multispecies coniferous forests -  Serratula  Piceetum, moist coniferous forest -  Myceli Piceetum. Boreal character definetely can be also found in swamp spruce tree communities - Sphango Piceetum, marshy coniferous forest – Vaccinio uliginesi Pinetum, moss coniferous forest – Carici chordorrhixae Pinetum, marshy pine-birch wood – Thelypteri Betuletum, and spruce riverside forest – Piceo Alnetum.

The flora of Knyszyńska Forest consists of 843 vascular plants (including 26 species of pteridophytes which constitute about 38% of the total vascular flora in Poland. It have been recorded about 200 species of mosses and liverworts and 280 species of lichens. Present state of flora researches in the Park is not entire as many species are still awaiting description. Is it therefore that numerical data shown here is understated.


Today knowledge regarding Knyszyńska Forest allows to claim that it is undoubtedly an extremly interesting natural object. According to a great variety of habitats with a great amount of flora and fauna Knyszynska Forest Landscape Park is not below the other well-known and precious natural objects. Unique flora of Knyszyn Forest very often  can be hardly found in other parts of the country.
As a forest complex with its unique environmental recources  Knyszyńska Forest varies from the other ones occurring in Poland especially in terms of flora.  This is the result of different climate features – typical for north-eastern Poland. For this reason a transitional character of flora can be met here which is distinguished by infiltrating of elements from the middle Europe as well as north-eastern  Europe. A number op plant associations commonly ocuring in Eastern Europe possesses here its eastern and south-eastern borders of range or at the same time its main allocation in Poland.

The most characteristic feature is a considerable share of spruce in forests. There is a lack tree species such: sycamore, European beech, silver fir, Polish larch. Seasile oak – west European species which  can be found in “Stara Dębina” reserve and also around it reaches here its northern-east border.

About uniqness of Knyszyńska Forest decides also a presence of specific ecotype of Scotch Pine called also Supraska Pine or Mast Pine. At presence they are the most beautiful and the most attractive examples of this species in the country and presumambly in Europe also. 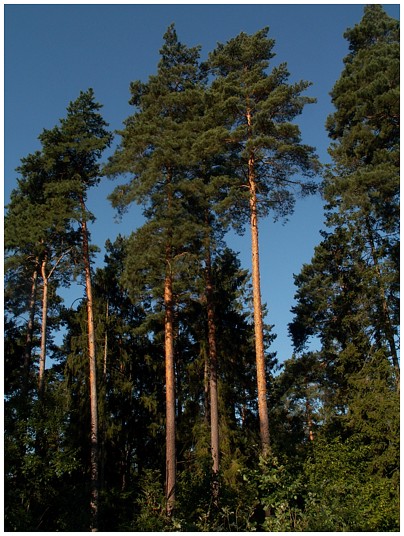 
Fauna of Knyszyńska Forest is typical for European Lowland and similar to ones occurring in Agustowska and Białowieska forests. It does rather  not belong to areas with exotic species which can be found only here.
The knowledge about biodiversity of small mammals species occurring in the Park  is still unsufficient  and limited to its small fields. However rich biodiversity of plant associations, numerous, well preserved, natural forest fragments make suitable conditions for living small mammals not existing elsewhere anymore. The knowledge about species biodiversity mainly comes from from bird’s droppings as well as traps using.

One of the bigest and most attractive animal in Knyszyńska Forest is the bison Bison bonasus – the bigest European mammal. The founder of present herd was a lonely bull which had migrated from Białowieska Forest probably in 1969. In 1973 another 5 (two bulls and three cows) were brought from there and set free in the Waliły Forest District.From that time the herd has been developing constantly and now consists of over than 100. 
Equaly attractive dweller of forest is undoubtedly the deer  Cervus elaphus whose horns reaches here enormous size as well as quality. The artiodactylous mammals are represented also by frequent wild boar Sus scrofa, deer Capreolus capreolus and elk Alces alces which appeared in Knyszyn Forest quiet recently as an emigrant from main refuge in north-eastern Poland –  Biebrza marshes. Its population is not high.


On the river-sides and spring-sides it is possible to meet muskrat  Ondatra zibethica and beaver Castor fiber then again European hares  Lepus europaeus  are present on forests’ edges.  Walking in the forest it is easy to see squirrel Sciurus vulgaris while the  hedgehog Erinaceus europaeus can be seen near to homesteads.